It's already time for my next project. No time to rest haha

After seeing the amazing projects in the Haunted PS1 Demo Disc, I couldn't help but be inspired to make something too!

So with that I am teaming up with my brother who is a designer to create a nice ~1 hour game in a PS1 style in Unreal and some good progress has been made already so lets get into it shall we :P

So to start with I wanted to make sure I could get the correct visual effects:

Step one was to create a post processing material that could create a pixelation effect as well as a limited colour range to emulate the old school grathics.

The left side up is the pixelation effect that can be changed by a global value, so it could be changed anytime including ingame so I decided to make it a collection parameter setting. On the right is the limited colour scale effect that is also changed with a parameter to fit to purpose.

I created a master material that would be used across the game, I will likely make additions as I go along. I neatened it up using material function which I will now go into

First off I will show the three effect that I put into the PS1 Material Effects Function:

This one is the affine texture effect

This one is a vertex jitter effect

This one causes vertices to snap to a grid as the camera moves around creating a slight jittering effect that emulates the old fixed point positioning of the PS1 before float positioning.

This is a vertex offset effect 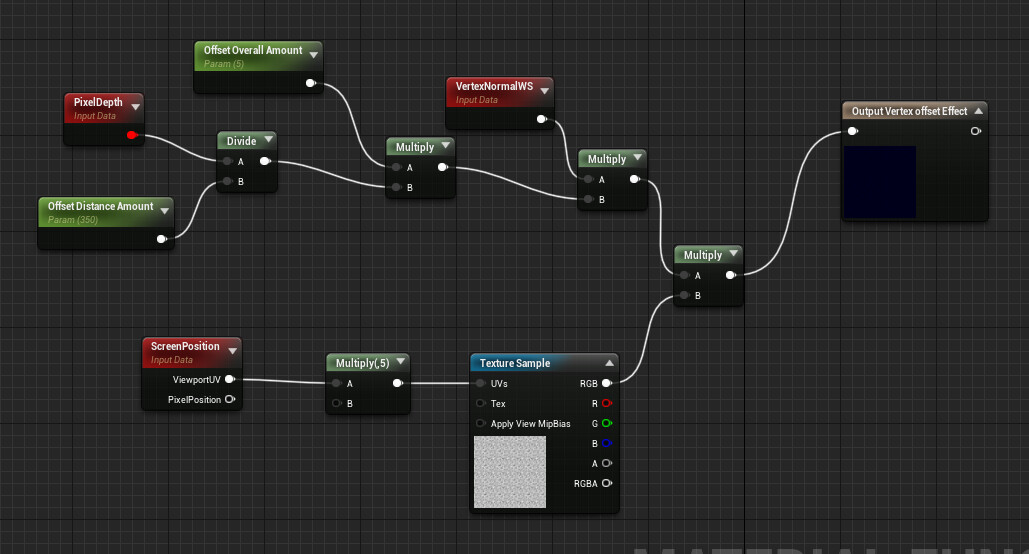 This one pushes out the vertices creating seams in the mesh. This one I actually have disabled at the moment as I figure out a best way to do this as this wasn't exactly how it used to work, it only had seams between mesh.

This is the material function for the lighting system of the game which is vertex based.

Since everything in the game will technically be unlit, I wanted to make an overall ambient brightness level added to every material that I could set in one value dynamically. To get the best visuals I made a weird if statement so that if the number was below 0.5 then it would multiply to make it darker and above blend overlay to make it brighter. Also here is where I overlay a colour for the light the main character emits (from a torch or whatever reason) that I will go into now:

I also have the radius of the light set up to the parameter collection so I can adjust that as nessisary.

Phew that was a lot of fancy material shader stuff haha I hope that helps anyone else out who wants to try and emulate this style. Apart from that I have created some art to start testing workflow and made a simple camera/tank control set up. I am too tired to write up about them just yet so I will save that for next week :P

For now I will just leave you with this short video showing what the prototype looks like so far:

As always let me know what you think and I will see you all again next week :P